Our organic cinnamon powder is the botanical variety Ceylon or True cinnamon, a superior quality product with a host of health benefits and vast variety of uses.

Our organic Ceylon cinnamon powder is the botanical variety cinnamomum zeylanicum which comes from the bark of the laurel tree. 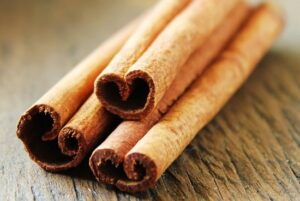 The distinct smell and flavour of cinnamon is attributed to the oils present, which are very high in a compound called cinnamaldehyde. This compound is responsible for most of the cinnamon’s beneficial effects on health and metabolism.

Ceylon cinnamon is reported to have potent antioxidant and antifungal properties. It is also known to act as an effective anti-inflammatory and could be beneficial for heart health and circulation.

Our cinnamon powder melts in the mouth and has a warm, delicate, flavour and spicy aroma. It as a natural sweetness which is the perfect addition when baking or in hot drinks and to create complexity and depth in cooking.