Grown in the Amazon region, guarana berries have been used like coffee in its native Brazil for centuries. Each fruit harbours one seed which contains approximately five times as much caffeine as coffee beans.

Guarana powder has become extremely popular in the energy drink market as an alternative source of caffeine. A native evergreen sprawling shrub-like vine grown in the Amazon region, the guarana tree produces red berries that have been used like coffee in its native country of Brazil for centuries. Each fruit harbours one seed which contains approximately five times as much caffeine as coffee beans. 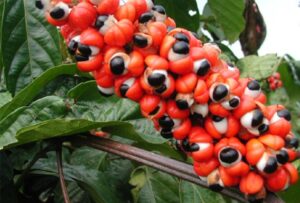 When ripe, the fruit partially opens and at this stage the seeds are harvested to prevent them from falling on the ground; they are then roasted, dried and ground into a powder. As with other plants producing caffeine, the high concentration of caffeine is a defensive toxin that repels pathogens from the berry and its seeds.

Guarana is widely employed to flavour carbonated soft drinks and is often used in energy bars and even chocolate bars for flavour.

* These approved health benefits are based on the detailed nutritional composition of the product we supply. These health benefits may not be applicable to similar products from other suppliers.

Guarana can be brewed as a tea, added to food and snacks or made into capsules for convenient consumption. Other products that are good for energy are matcha, maca, green coffee, and marine phytoplankton.

Precautions
Guarana is a central nervous system stimulant similar to coffee, but stronger. Anyone who has been advised to avoid coffee should avoid guarana. Its long term use is not recommended and it is to be avoided while pregnant.