Turkey tail (trametes versicolor, coriolus versicolor) is a common polypore mushroom species that has been used as a traditional Chinese tea to boost the immune system.

Please note we have a limited amount of this wild harvested turkey tail powder in stock, it is non-organic because it’s not cultivated.

Turkey tail mushroom powder (trametes versicolor also known as coriolus versicolor ) comes from a common polypore mushroom species that closely resembles a turkey’s tail, hence the name. Turkey tail is a form of bracket fungus that grows on the side of trees. 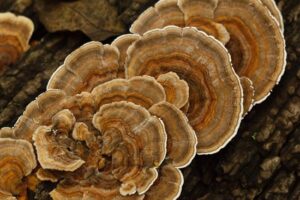 Turkey tail mushroom is said to correct immune deficiencies. Turkey Tail contains the polysaccharide PSK is known to enhance the body’s immune response.  Research has confirmed that a daily dose of turkey tail has a positive effect on the immune system, as well as an increase in lymphocyte and natural killer cells.

This mushroom has been brewed for thousands of years as a Chinese medicinal tea. In Japan, turkey tail is used in tandem with conventional cancer treatment to help support the immune system. There are plenty of clinical trials on trametes versicolor, many of which are testing its role in supporting the immune system. Please do your own online research on this amazing mushroom powder.