Shativari is a nourishing and soothing herb that has been used for centuries in traditional Ayurvedic medicine as a rejuvenative tonic for the female reproductive system.

Shatavari, translated as “having 100 spouses” is also known as asparagus racemosus. Organic Shatavari Powder is a sweet, cooling, nourishing and soothing herb that has been used for centuries in traditional Ayurvedic medicine as a tonic. Shatavari’s name gives reference to its use as a rejuvenating tonic for the female reproductive system 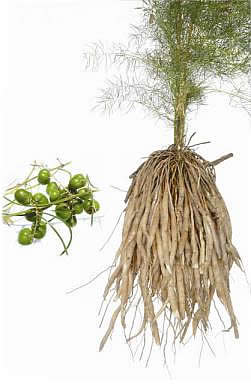 Organic shatavari powder is a good source of zinc and calcium and also provides a range of B complex vitamins. Its oestrogens do not produce negative side effects and this gentle herb will promote a balance of hormones for women, which is why it is often called “The Queen of Herbs.”

At Detox Trading we stock a large range of amazing Ayurvedic herb powders, check them out here.

Suggested use of Organic Shatavari Powder:

Start with about ½ to 1 tsp and build up to 2 tsp a day, it is traditionally taken mixed in a glass of warm milk with honey, but can be used with juice, water or nut milk.

Shatavaris unique flavour starts the digestive process and sends signals to the body as to what to expect, initiating your body’s own inner pharmacy.